Angela Y. Davis is Distinguished Professor Emerita in the History of Consciousness and the Feminist Studies Departments at the University of California-Santa Cruz. A well-known political activist, Davis has been an influential voice in some of the most significant social struggles of the post-war period, including her involvement in the civil rights movement, contributions to feminist activism and her long-term critique of the American prison system. A leading supporter of prison abolition, Davis’ ongoing scholarship and public activism targets what she has called the “the prison-industrial complex”, a reference to the privatization of prisons, the increase in imprisoned populations as well as the racism of the criminal justice system in the United States. Davis is a founding member of “Critical Resistance”, a national movement dedicated to abolishing prisons. Angela Y. Davis is the author of numerous essays, articles and books, including Women, Race and Class (1983), Blues Legacies and Black Feminism: Gertrude “Ma” Rainey, Bessie Smith, and Billie Holliday (1999), Are Prisons Obsolete? (2003), Abolition Democracy: Beyond Prisons, Torture and Empire (2005) and most recently, The Meaning of Freedom (2012). Additionally, her seminal writings have been gathered in The Angela Y. Davis Reader (1998), edited by Joy James. Her books in Turkish translation include Kadınlar, Irk ve Sınıf (Sosyalist Yayınlar, 1993) and Eğer Şafakta Gelirlerse (Agora, 2008). 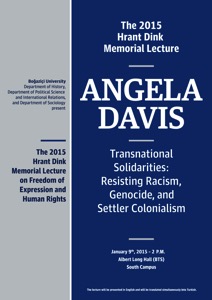