Loïc Wacquant is a sociologist, specializing in urban sociology, urban poverty, racial inequality, the body, social theory and ethnography. He has been a member of the Harvard Society of Fellows, a MacArthur Prize Fellow, and has won numerous grants including the Fletcher Foundation Fellowship and the Lewis Coser Award of the American Sociological Association. Wacquant's work explores and links together diverse areas of research on the body, urban inequality, ghettoization, and the development of punishment as an institution aimed at poor and stigmatized populations. His interest in these topics stems from his experience in the black ghetto as a graduate student at the University of Chicago in the mid-1980s. Commenting on this experience in The New York Times in 2003, he said "I had never seen such scenes of desolation. I remember thinking: It's like Beirut. Or Dresden after the war. It was really a shock." His intellectual trajectory and interests are dissected in the article "The Body, the Ghetto, and the Penal State" (2008) 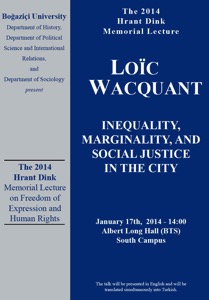