Rabab El-Mahdi is a leftist-activist, who has joined and co-founded a number of opposition groups in Egypt, including Kefaya prodemocracy movement, the National Front for Democracy and Social Justice, and Women for Democracy. She is Assistant Professor of Political Science at the American University in Cairo and co-editor of Egypt: The Moment of Change (Zed Press, 2009). She is also the author of a number of publications including, most recently: “Orientalizing the Egyptian Revolution” in Jaddaliyya, Empowered Participation or Political Manipulation? Civil Society and the State in Egypt and Bolivia (Brill, 2011) and “Labor Protests in Egypt: Causes and Meanings” in Review of African Political Economy (September 2011). 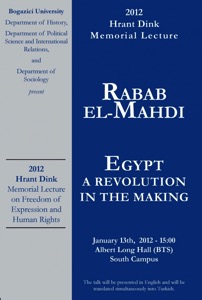