Architect and human rights activist. Eyal Weizman is Professor of Spatial and Visual Cultures and founding director of the Centre for Research Architecture at Goldsmiths, University of London. He graduated in architecture in 1998 from the Architectural Association in London and completed his PhD at the London Consortium/Birkbeck College in 2006. In 2010 he founded the research agency Forensic Architecture and directs it ever since. Weizman is on the editorial board of Third Text, Humanity, Cabinet and Political Concepts and is on the board of directors of the Centre for Investigative Journalism (CIJ) and on the Technology Advisory Board of the International Criminal Court (ICC) in The Hague. His books include The Roundabout Revolution (Sternberg, 2015); The Conflict Shoreline (Steidl and Cabinet, 2015), Architecture after Revolution (Sternberg, 2014); Mengele’s Skull (with Thomas Keenan, Sternberg, 2012); The Least of all Possible Evils (Verso, 2011); Hollow Land (Verso, 2007); A Civilian Occupation (Verso, 2003). 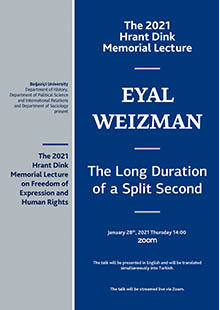 Eyal Weizman’s talk will focus on “forensic architecture,” an emergent academic field and practice that uses architectural techniques and technologies to investigate cases of political violence and violations of human rights around the world. It involves the production and presentation of architectural and media-based evidence within legal and political processes. Weizman will address political, legal, and conceptual issues and challenges related to the counter-investigations conducted by his research agency, Forensic Architecture. He will concentrate on several cases involving advanced spatial and media investigations of political violence by state authorities, police, military and companies, affecting human rights organizations, environmental justice groups, and media organizations.
Click to register.