Eleni Varikas was born in Greece in 1949. She is professor emeritus of political theory and gender studies at Vincennes University / Paris 8, and researcher at the Center for Sociological and Political Research at Paris (CRESPPA) of the CNRS. She has previously taught at the EHESS and Paris 7 University in France, and at the Universities of São Paulo (USP) and Campinas (UNICAMP) in Brazil. She was also a professor and guest researcher in several universities, including the Free University of Brussels, the University of Lausanne, the University of Athens, and the European University Institute in Florence, and had visiting professorships at the Center for European Studies at Harvard University, Columbia University, and the New School in the USA. Her books and articles, which span a broad spectrum of subjects including feminism, gender in political modernity, social hierarchies, racism, the coloniality of knowledge, the epistemology of the humanities, subjectivity, the figure of the outcast and Max Weber, have been published in nine languages. A collection of her articles has recently been published in Paris with the title: Eleni Varikas. Pour une théorie fémininiste du politique [Eleni Varikas. For a Feminist Theory of Politics] (2017) edited by Isabelle Clair and Elsa Dorlin. 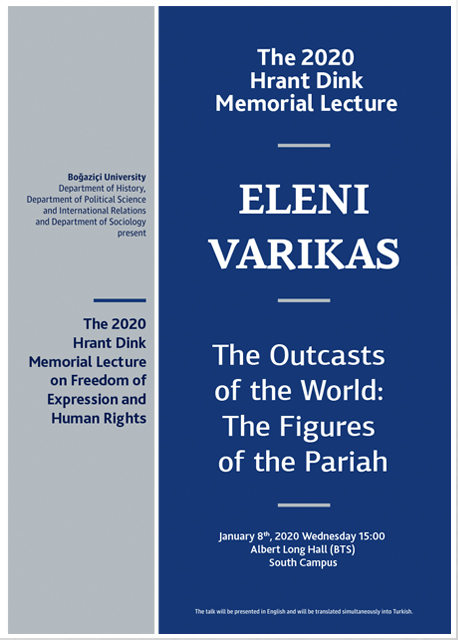 The Outcasts of the World: The Figures of the Pariah Since the end of the eighteenth century on, the metaphor of the “pariah” has provided an idiom of reflection on, and critique of the logic of privilege and caste which kept governing the fate of certain social groups, in spite of the founding principle: a general law for all. The appearance and history of this figure has been shaped by the ever present tension between this democratic principle and, the practices of stigmatization and exclusion, which, over the last two centuries, have grown and prospered not only in authoritarian regimes, but also at the very heart of democratic political systems. The figure of the pariah has been shaped by a plurality of experiences and the discontinuities: the 1848 women's exclusion from suffrage and from the equal right to work, the racist barbarity of the Reconstruction in the USA after the abolition of slavery, the practices of lynching and segregation, the drawbacks that marked the liberation of the Balkan slaves, the Dreyfus affair, the savage repression of the Paris Commune, the racist legislation imposed on the French Roma communities during the Third Republic, the disasters of European colonialism. Yet, the history of the pariah has also revealed “a hidden tradition” of rebel pariahs (Arendt) who ventured to make emancipation what it should have been: the admission to the rank of universal humanity of every single individual with a human face.