RONALD G. SUNY is the William H. Sewell Jr. Distinguished University Professor of History and Professor of Political Science at the University of Michigan; Emeritus Professor of Political Science and History at the University of Chicago; and Senior Researcher, National Research University- Higher School of Economics, Saint Petersburg, Russia. An eminent historian of modern Europe and the Soviet Union, he writes extensively on issues of nationalism, ethnic conflicts, class politics, and Empire. His engagement with these issues has reached beyond academic circles, informing the public discussions on Russia and South Caucasia – Armenia, Azerbaijan, and Georgia. He has appeared numerous times on global and American national media including McNeil-Lehrer News Hour, CNN, Voice of America, and National Public Radio, and has written for the New York Times, The Nation, New Left Review, and Dissent. Suny has published numerous articles and books, which received prestigious awards. In his work, he has explored the nature of nations and empires by studying the history of imperial Russia and the USSR. Challenging the established paradigm, his research has brought the woefully neglected non-Russian half of the population, particularly peoples of South Caucasia, to the center of historical scholarship. This endeavor involves rethinking the processes of imperialism and nation-making at its margins with a particular focus on ethnic conflicts and mass violence. He is currently working on a biography of the young Stalin and a series of historiographical essays on Russia and the Soviet Union. He lives in Ann Arbor, Michigan, with two cats. 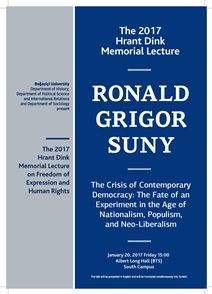 The Crisis of Contemporary Democracy: The Fate of an Experiment in the Age of Nationalism, Populism, and Neo-Liberalism. In the last twenty-five years, since the disintegration of the Soviet Union, many states in Europe and the Middle East have experienced political transitions from authoritarianism to democracy and back again to some form of authoritarianism. After experiencing the triumphant optimism that marked the collapse of Communist-led regimes, scholars have given way to a shared pessimism about the possibility of achieving real, lasting, liberal democracy. In that part of the world formerly ruled by Communist parties talk about “transitions to democracy” and the “building of a market economy,” returning to the “path of civilization,” and an “end of history” with the universal establishment of western-style liberal societies has been superseded by a greater caution about the possibility of remaking Eastern Europe and the former Soviet Union in a Western democratic image. A whole range of quite distinct political and economic hybrids, from more congenial democratic structures in the Czech Republic, Slovenia, and Slovakia, to restoration of the old Communist nomenklatura, now in national garb, in the countries of Central Asia, have emerged. Bright spots have appeared but shadows grow longer. Yet for the researcher and teacher a whole new field for exploration has been opened. A veritable laboratory for talking about and testing theories of political and social change, the limits and possibilities of reform, the nature of revolution in developed societies, the relationship between economy and politics, the salience of culture and multiple cultures, and the costs of political transition and social transformation. A shift in the progress toward democracy occurred sometime in the mid-2000s, and many states that had experienced partial democratization, among them notably Russia and Turkey, turned away from true representative government, protection of minorities, and constitutional restraints on executive power. Among the states most immediately affected by the turn away from democracy are Russia, Turkey, Hungary, Poland, Egypt, Israel, the states of Central Asia, and Armenia. Right-wing, anti-immigrant movements have affected even consolidated democracies like Denmark, Holland, France, and Germany among others. The victory of Donald Trump in the US presidential election in 2016 also appears to involve many of the same ingredients – alienation of dispossessed classes, fear of foreigners, attacks on journalism, and populist appeals. This global erosion of democracy, which includes increased nationalist and xenophobic appeals, demagogic and populist rhetoric, and calls for stronger executive power, appears to be transnational rather than culturally or regionally specific. How is this shift away from more liberal democracy to more populist, nationalist, and authoritarian regimes (often maintaining democratic forms) to be explained? In this talk I will begin with both a history and a definition of what I understand to be the contemporary form of democracy -- what might be called "actually existing democracy" or "bourgeois democracy," the latter concept emphasizing the increased role of property, personal and corporate wealth as a factor undermining democratic choices. The talk investigates how discourses of politics and the language, practices, and images of leaders have managed to exploit the failures of democratic governments to deal with the colossal problems of income inequality, political polarization, the sense of disenfranchisement on the part of lower and middle class people, and the fear of cultural loss posed by migration and the perceived threat from radical Islam. My provisional hypothesis is that democracies have worked best when combined with some form of state welfare and protection of the most vulnerable, a degree of social equality and access to impartial justice, and either relative homogeneity of the population or serious efforts to tolerate, include, and even promote diversity. However, the race to the bottom that has taken place with globalization and the shredding of social safety nets have left more and more people exposed to the vagaries of neo-liberal capitalism. Voters who fear the future and foreigners have turned to more conservative, nationalist, and radical right alternatives to liberal and social democratic parties. In liberal modernization theory the social transformation from village to city, agriculture to industry, and illiteracy to an educated population was supposed to lead toward a Western-style democracy and free market economy. But the modernity that emerged in the last quarter century has left many people behind. Change has occurred so rapidly that life has become unpredictable; economic development has made many people increasingly redundant and unable to cope with de-industrialization; and cultural transformations, such as the increased role of women and the visibility and empowerment of minorities, as well as the increased secularization of life, have aroused fear in many that their way of life and beliefs are threatened. Too often an easy explanation for why democratic transitions have failed has placed the blame on ordinary people. It has been asserted that Russians like authoritarian leaders or that Turks are blighted by the heritage of Islam. My own investigations, along with many political scientists, focus primarily on the actions and ambitions of political elites. Democracy requires democrats, and if political elites opt for authoritarian or corrupt paths to power, ordinary people are left defenseless. The motivations, actions, and popular successes of leaders like Donald Trump, Victor Orban, and Vladimir Putin will be central to my analysis, but the social, political, economic, and international factors that contribute to the effectiveness of their appeals are among the ideas that I would like to investigate in my talk.